Pulkit Has Been Following Girlfriend Kriti's "Skincare Advice." Her Reply 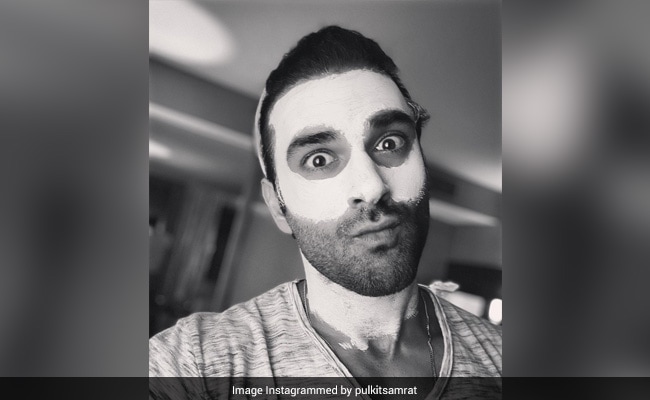 Pulkit Samrat has been following a new skincare routine these days and we can't wait to see the results. The actor, on Thursday, shared a hilarious black and white selfie, in which he can be seen sporting a face pack and making a goofy expression while clicking his photo. In the caption, Pulkit Samrat revealed that he has been following his girlfriend Kriti Kharbanda's "skincare Saturday advice." Well, the actress has the cutest response to this. In the comments section of Pulkit's post, she wrote: "Cutie" with laughing and little more personal emojis. Pulkit's fans also dropped laughing icons in the comments section.

And here's what Kriti Kharbanda commented: 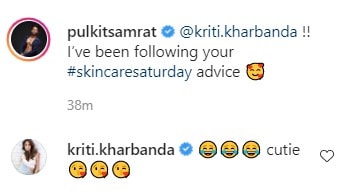 Kriti Kharbanda and Pulkit Samrat often share glimpses of their date nights. The duo were living together during the nationwide lockdown last year.

Last month, Pulkit posted a picture from his "first ever date in Mumbai" with Kriti. He wrote: "Date night! Sach boloon to... 'twas our first ever date in Mumbai! We've been out together with friends, with family, with colleagues but never just the two of us! Work's been taking up most of our time and it felt just right to venture out and spend some alone time together. That's what dates are... it's two people ka "alone" time, amidst the chaos of the city, regardless of the chaos around."

Kriti Kharbanda and Pulkit Samrat reportedly began dating in 2019. They first co-starred in the 2018 film Veerey Ki Wedding and later in Pagalpanti, which released last year. Their last film Taish, directed by Bejoy Namibar, released on Zee5 in October.

Kriti Kharbanda is known for her performances in films like Housefull 4, Super Ranga and Shaadi Mein Zaroor Aana. Pulkit Samrat will next be seen in Haathi Mere Saathi, which features Baahubali actor Rana Daggubati in the lead role. He also has a film with Katrina Kaif's sister Isabelle, titled Suswagatam Khushamadeed, lined up.