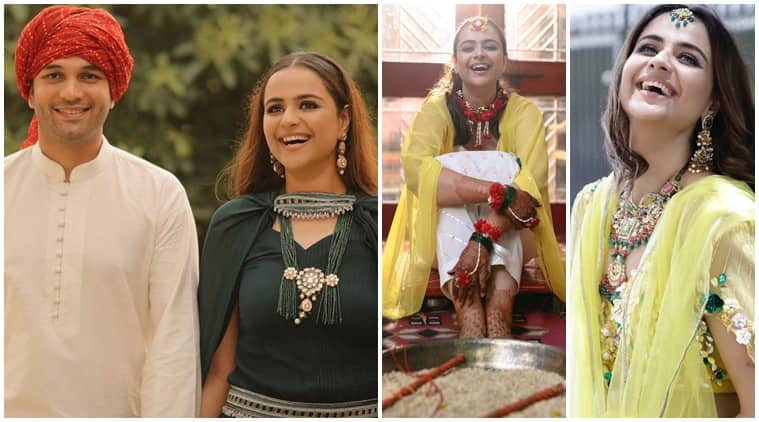 Actor Prachi Tehlan is set to tie the knot with Rohit Saroha today. The sportsperson-turned-actor has been sharing updates and pictures from her pre-wedding functions on her social media handles. During an Instagram live with Indian Express Entertainment, Prachi revealed what she found attractive about Rohit and how she was feeling about getting married during the coronavirus pandemic. She said, “Rohit is very adventurous like me. We’ve never had this 9 to 5 kind of a work schedule. He’s also never done usual things in life which really attracts me towards him. He is a wildlife conservationist. He’s also represented India at the BRICS in Russia and has studied law. So, like what I’ve done in my career – being a sportsperson, a corporate person and an actor, even his life has been a roller-coaster ride. That’s something where we connect. And he’s tall!”

Prachi was speaking while taking a break from her mehndi ceremony. She said how it was sheer destiny that she found her groom in Rohit, someone she’s known for the past eight years. “If you had asked me this question two months back, I would’ve said I haven’t found my groom and I’m not getting married for the next 3 years. But as they say, marriages are made in heaven, and I truly believe in it now. Me and Rohit got to connect with each other during the lockdown. We felt our 8-year-old love and connection again. We thought let’s not waste any more time and take a call, and spend time and life with each other.” Getting candid about Rohit proposal, Prachi further said, “Rohit used to like me a lot even in 2012 when we met at a family function. (When we reconnected) The very next day, he proposed marriage. I was shocked because that wasn’t in my mind. Then we spoke about it, and our parents were already involved. So everything just happened.”

Before becoming an actor, Prachi was a sportsperson. She was the former captain of the Indian Netball Team which represented India in the 2010 Commonwealth Games and other major Asian Championships in 2010-11. In fact, under her captaincy, the Indian team won its first medal in 2011 South Asian Beach Games. She then made her acting debut with television show Diya Aur Baati Hum (2016). He first movie was Punjabi film Arjan. Prachi was last seen in her debut Malayalam film Mamangam, starring Mammootty in the lead role.