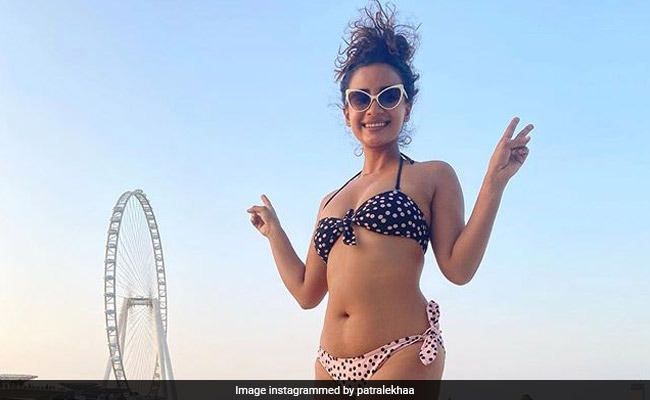 Patralekhaa shared a set of stunning pictures from a beach on her Instagram profile on Monday. She didn't reveal if the photographs happen to be throwbacks or recent clicks but she looks every bit stunning in them. The actress mixed and matched her swimwear and the results were amazing. She can be seen wearing a bikini with polka dots. Patralekhaa can be seen sporting a messy bun and a pair of tinted sunglasses in the picture. She accessorised her look with a brightest of grin and added a couple of mermaid emojis to her post. No caption needed. The comments section of her post was flooded with heart and fire emojis.

The actress frequently features on the list of trends for her relationship with actor Rajkummar Rao. On his birthday this year, she shared a super cute birthday greeting for the Newton actor and wrote: "Happy birthday to the golden boy with a beautiful heart. Thank you for telling me #Rasodemeinkauntha." Rajkummar and Patralekhaa, who have been dating for six years now, often post adorable pictures of each other on social media.

ICYMI, this is the post we are referring to:

Patralekhaa frequently shares pictures from her vacations - sometimes from beach and the other times, from a hilly terrain. See some of the posts here:

Patralekhaa made her debut in Bollywood opposite Rajkummar Rao in the film CityLights. The actress has also starred in films such as Love Games, Badnaam Gali and Nanu Ki Jaanu, to name a few.