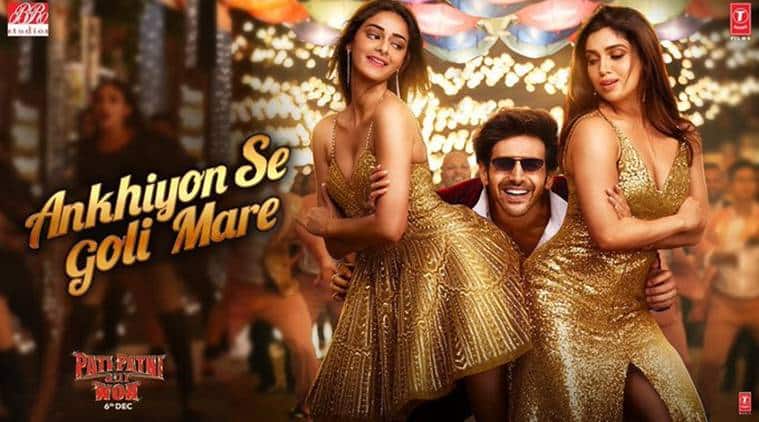 Another chartbuster is spoiled! Until when will we, the 90s kids, have to listen to the horribly re-done versions of our favourite songs. Pati Patni Aur Woh song “Ankhiyon Se Goli Mare”, featuring Kartik Aaryan, Bhumi Pednekar and Ananya Panday, is yet another example of T-Series’ disregard for original compositions.

The song, rearranged by Tanishk Bagchi, is neither a good watch nor is it an earworm. Bhumi looks a complete misfit in the song. Watching Kartik and Ananya dance half-heartedly made me miss Govinda and Raveena Tandon who featured in the original song in the 1998 film Bade Miyan Chhote Miyan.

Vocals by Mika Singh also cannot save the rehashed song. The only few seconds when you get groovy is when the hook line, which has been retained from the original song, plays.

You might feel the urge to watch the original song starring Govinda and Raveena Tandon after watching this rehashed version of “Akhiyon Se Goli Maare”. So here it is:

Farah Khan, who has choreographed the song, said, “Ankhiyon Se Goli Mare is an iconic song and I agreed to do it because Juno is a dear friend. Hope this new foot-tapping version appeals to the audience the way the original song did back then. We have tried to make it different and interesting but at the same keeping the essence of the original intact.”

Kartik Aaryan, who claims to be a Govinda fan, said he loved dancing on “Akhiyon Se Goli Mare” in Pati Patni Aur Woh. “This song used to be one of my favourite Govinda tracks during my growing up years. We all have been an ardent admirer of his dancing style. I am so happy that I got an opportunity to dance to it in my film,” he said.

Directed by Mudassar Aziz and produced by Bhushan Kumar, Renu Ravi Chopra and Krishan Kumar, Pati Patni Aur Woh is a remake of the 1978 film of the same name. It is scheduled to release on December 6