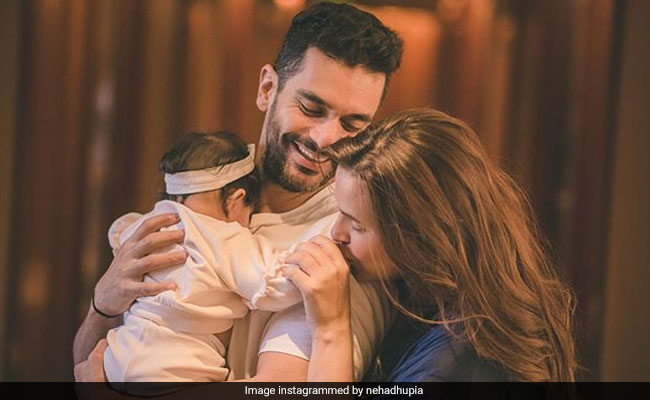 Ah, that Monday feeling. As we power up to kick-start the week, actress Neha Dhupia's post about the 'Monday mood' will resonate with those struggling with Monday blues. With an ROFL Instagram post featuring her eight-months-old daughter Mehr, Neha Dhupia explained that Monday blues don't escape even the little ones: "Mehr Dhupia Bedi is feeling it too," she captioned her photo, in which baby Mehr can be seen adorably cuddled up in her bed as she snoozes through Monday morning. Neha Dhupia and Angad Bedi married in May last year and Mehr Dhupia Bedi was born to them in November.

Neha and Angad also marked Mehr's half-year birthday in May with the cutest family photo: "Shape of my heart... our baby girl," Neha captioned her post, that will warm the coldest of hearts:

Shape of my heart .... our baby girl #6monthstoday

Angad Bedi and Neha Dhupia had an intimate wedding at a Delhi gurudwara on May 10 and Mehr was born on November 18. The couple had later revealed in interviews that Neha Dhupia's pregnancy was the reason behind the nature of their rushed wedding. Neha Dhupia, known for starring in films such as Tumhari Sulu, Hindi Medium and Ungli among others, currently co-hosts MTV Roadies. She also anchors the talk show BFFs With Vogue on Colors Infinity. Angad Bedi was last seen in 2018 film Soorma.