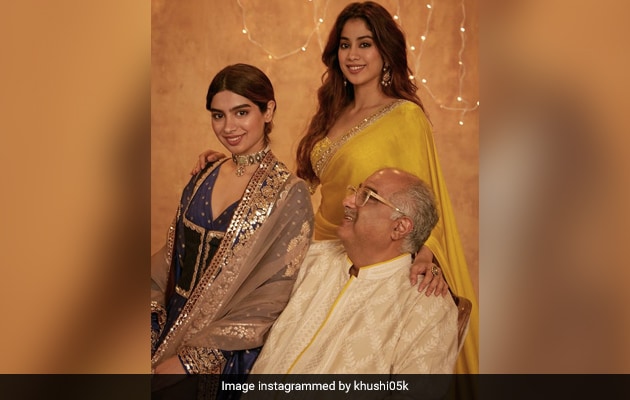 After Janhvi Kapoor, Sridevi and Boney Kapoor's younger daughter Khushi will also step into Bollywood as an actress, the producer confirmed in an interview with Bombay Times. Janhvi made her debut as an actress with Shashank Khaitan's 2018 film Dhadak. Now, talking to Bombay Times about Khushi Kapoor's acting debut, Boney Kapoor said: "Yes, Khushi is also keen on acting." He also confirmed that there will be an announcement soon about his younger daughter's debut in films. "You will hear an announcement soon," Boney Kapoor told the publication, adding that he won't be launching Khushi.

"I have the resources, but I would rather have someone else launch her because I am her father and one tends to get indulgent. You can't afford to do that as a filmmaker and nor is it good for the actor. Anil (Kapoor) was still an established actor, so it didn't affect him much, but I think I became an indulgent brother with Sanjay (Kapoor) when he made his entry into films," said Boney Kapoor.

According to Boney Kapoor, Khushi will make her acting debut in a film directed by someone he "respects." He told Bombay Times: "I would want Khushi to find her own footing. She will be launched by someone I respect and someone I feel secure and safe about."

Even before her Bollywood debut, Khushi Kapoor trends several times on social media for her fashionable outfits and her ROFL moments with sister Janhvi. Khushi made her Instagram profile public in December last year. Some of our favourite posts from her feed feature her mom, late actress Sridevi, and dad Boney Kapoor. Take a look:

Janhvi Kapoor made her entry into the Entertainment industry with Dharma Productions' 2018 film Dhadak, a Hindi remake of Marathi hit Sairat. Her next project was Netflix's anthology Ghost Stories. She was last seen in Dharma Productions' Gunjan Saxena: The Kargil Girl, which also starred Pankaj Tripathi and Angad Bedi. She now has Karan Johar-directed Takht and Dharma Productions' Dostana 2 lined up.