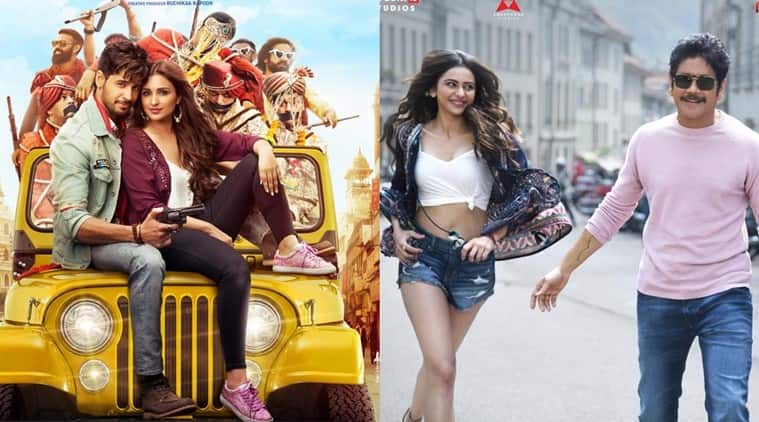 Jabariya Jodi, starring Sidharth Malhotra and Parineeti Chopra, releases today. Directed by Prashant Singh, the film is a light take on groom kidnapping. This is Sidharth and Parineeti’s second film together after 2014’s Hasee Toh Phasee. The film has been written by Sanjeev K Jha. The film also stars Aparshakti Khurana, Sanjay Mishra and Jaaved Jaaferi among others. Elli Avram has a special appearance in the film.

Telugu film Manmadhudu 2, starring Nagarjuna and Rakul Preet, also hits the screens today. From the trailer, it looks like writer-director Rahul Ravindran has made a typical romantic comedy. Manmadhudu 2 is a sequel to Manmadhudu, which was one of the highest-grossing Telugu films in 2002. Manmadhudu 2 is the Telugu adaptation of the French film I Do.

Talking to indianexpress.com about Jabariya Jodi, Parineeti Chopra had said, “Hasee Toh Phasee had a cool, urban set-up. Jabariya Jodi is the opposite. It’s as desi as it gets. It’s as loud, larger-than-life and filmy as it gets. That’s half the reason why we signed the film because we wanted to come back together in the correct film but didn’t know what it was till Jabariya Jodi came.”

Sidharth Malhotra added, “It’s special to come back with a cast which has been loved before. There comes a lot of goodwill. But obviously, it’s not part two of Hasee Toh Phasee. It’s a different zone. There’s something new to look forward to. We are hoping the same crowd comes in and maybe there will be newer fans of me and Pari. We have put in a lot of hard work and effort into the film.”

Follow all the latest updates about Jabariya Jodi and Manmadhudu 2.