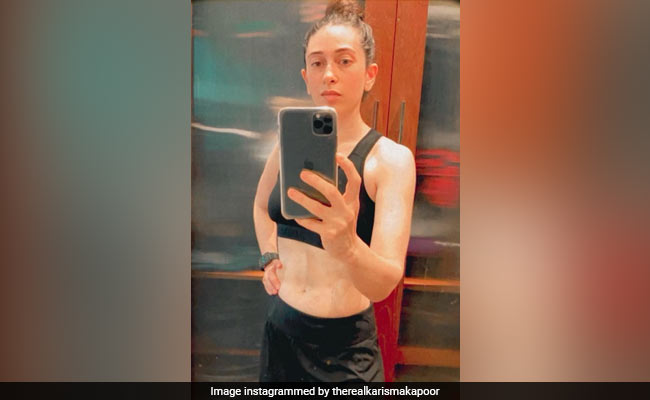 Karisma Kapoor is the perfect reminder that summer is almost upon us and that the winter kilos aren't going to shed themselves. Not that she needs to worry - the 46-year-old actress shared this workout selfie captioned "Burn" and boy, does she look like a million bucks. Her toned arms and abs on display in the briefest of gym kits - a cropped top and shorts in functional black - hair in a topknot and her face makeup-free, Karisma is the best advertisement for hitting the gym. The comment left by singer Kanika Kapoor - two fire emojis - summed it up.

Karisma spent her Sunday visiting her sister Kareena Kapoor at home - Kareena welcomed her second child with husband Saif Ali Khan a week ago. Karisma was pictured at Kareena and Saif's home in Mumbai accompanied by her friends Malaika and Amrita Arora and Malaika's boyfriend Arjun Kapoor. Kareena and Saif are parents to son Taimur, now four; their second son was born on February 21. Karisma Kapoor, 46, is the elder daughter of actors Randhir Kapoor and Babita. She broke the Kapoor mould with her debut in 1991 film Prem Qaidi - the vast Kapoor clan frowned on the women in the family acting, despite numbering several actresses in the family. Karisma's sister Kareena also became an actress and aunt Neetu Kapoor resumed her career some years ago.

Karisma Kapoor was one of the leading actresses of 90s-era Bollywood. She starred in films such as Raja Hindustani, Dil Toh Pagal Hai, Fiza and Zubeidaa. Karisma was cast opposite Govinda in a string of comic blockbusters such as Coolie No 1, Haseena Maan Jayegi and Hero No 1. She took an extended break from her career after marrying businessman Sunjay Kapur in 2003, making a comeback in the poorly-received 2012 film Dangeorus Ishhq after her marriage ended.

Karisma, who has a son and daughter with ex-husband Sunjay Kapur, was last seen n the web-series Mentalhood.