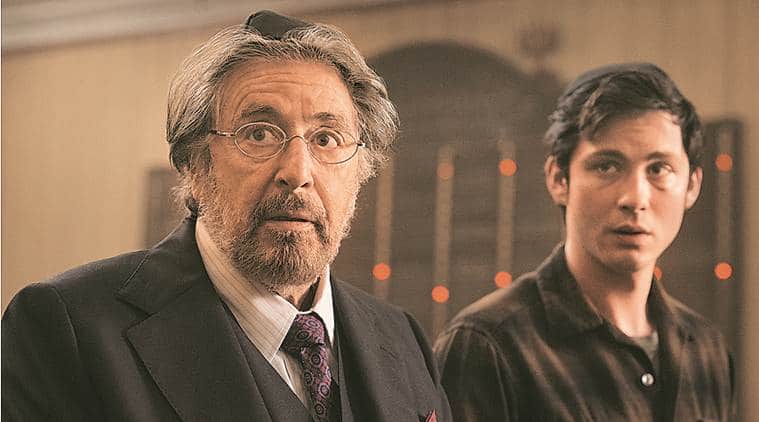 The game of chess has been often used as a metaphor for larger existential questions. It also fills in beautifully as a medium to make a certain point. A chessboard, where the typical wooden pieces have been replaced by miniature, grotesque human figurines, surfaces many times in Hunters, the latest offering by Amazon Prime. The chessboard separates Jonah (Lerman) and Meyer Offerman (Pacino) when they have their first heart-to-heart. As Jonah checkmates Meyer, we are taken to another chessboard, a life-size one, at a German concentration camp — where the grass has been chequered to resemble the board and the Jews are pawns to be played with. One is reminded of the scene from Harry Potter and the Sorcerer’s Stone (2001) where Ron is injured in in a similar game of life-size chess, only this one is chilling and fills us with a sense of foreboding that only gets worse as the 10 hour-long episodes progress. Hunters is set in two timelines, one in America in 1977 and the other in Germany during World War II. In America of the Seventies, we see Lerman continuing his Perks of Being a Wallflower routine. He lives with his Holocaust-survivor grandmother, is into superheroes, smokes up with his friends, and listens to Led Zeppelin. His life is disrupted when his safta (grandmother in Hebrew) is murdered in their New York home. Of course, Jonah, who likes Robin better than Batman and is a prodigy with numbers and patterns, figures out that this is not a random house invasion-gone-wrong. And that’s how he tumbles into this motley group, led by Offerman, who all the while leading regular lives, moonlight as Nazi Hunters. A large number of Nazis were shipped to the US and led pretty plush lives, hiding in plain sight, courtesy Operation Paperclip. Offerman, who is ‘Bruce Wayne’ rich, keeps tabs on them, and takes them out when possible. The ‘taking out’ is, let’s just say, long-drawn and violent.

So far so good. This is the kind of alternate history, bordering on fantasy, that keeps us hooked — remember Inglourious Basterds? But that doesn’t hold true for Hunters. There is too much tokenism and ticking off boxes to actually let the message sink. The motley crew is an exercise in diversity, with an Asian-American vet and a tough Black woman. Pacino himself is reduced to quoting from the Talmud, as he carries off his ageing weight and the burden of being an Italian-American, while playing a Holocaust survivor. There is too much happening all the time. With the back and forth between timelines, we are taken through the horrors that were meted out to the prisoners in the concentration camps. Then there are the Nazis themselves with their dream of setting up the third Reich.

Often, it’s the idea that keeps us going. This holds true for Hunters. The very idea of Nazis being delivered the fate they meted out to so many Jews is seductive and fantastical to the point of being taboo. As Pacino says in the show — “Revenge is the best revenge”.

The idea of Hunters was also strengthened by Jordan Peele, who has executive produced this and earlier gave us the brilliant Get Out. But the weakest link in Hunters is the writing, which is sporadically brilliant to downright Tarantino-rehashed bits. Sigh. Sometimes an idea is all you get.