Pm narendra modi man vs wild everything that happened In a special episode of Man vs Wild, Prime Minister Narendra Modi walked across the Jim Corbett National Park in Uttarakhand with Bear Grylls. The one-hour episode had PM Modi discussing conservation of nature and wildlife, among more.

Here’s everything that happened on the episode:

PM Modi on the dangers of nature

As Bear Grylls spoke about the dangers that could surround them in the national park, Narendra Modi said that “we should not consider this place dangerous.” He further said, “If we go against nature, everything becomes dangerous, even humans. But if we cooperate with nature, then nature cooperates with us.” PM Modi on his childhood

PM Modi gave an insight into his childhood. He told Grylls that he grew up in a low-income household but he always kept himself neat and tidy when it came to attending school. Modi then divulged how they used soil as a detergent in his younger years. He said, “So, in winter the dew drops that would form on the ground would create a layer of salt on the ground. We would take out that layer of soil, bring it back home and keep it. And we would use it as a detergent to wash our clothes.”

As they headed deeper into the conservation park which is thickly populated by tigers, Bear Grylls made a makeshift spear to keep “the most important man in India” safe. When he handed over the spear to Prime Minister Narendra Modi, he politely said, “Bear, my beliefs don’t allow me to kill. But for your safety, I’ll keep it with me.” He added, “God takes care of everyone. Leave it to God, and you will never face any problem.” 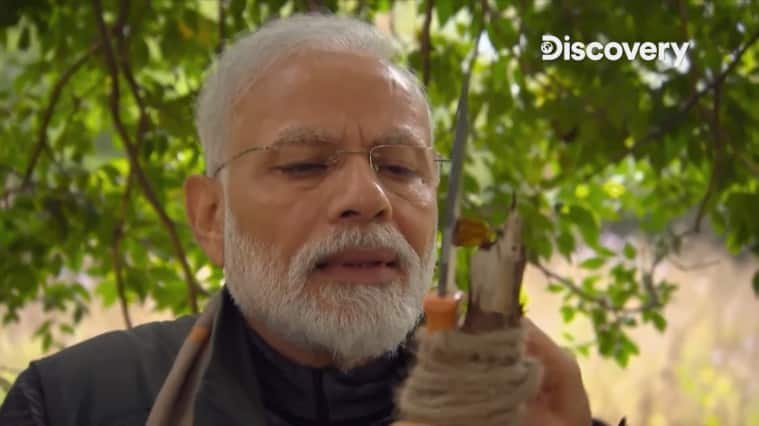 PM Modi shared with Grylls that he hasn’t had a vacation in 18 years. He said, “Today, if I consider this as a vacation then I must say I am taking a vacation for the first time in 18 years.”

Prime Minister Narendra Modi shared an anecdote with Bear Grylls where he revealed that he once brought a baby crocodile home. During his childhood years, he used to bathe in a pond when he once spotted a baby crocodile and decided to take it home. His mother said that it was wrong hence, he put it back in the pond.

Grylls shared that sometimes in the thick of things, people have a tendency to be afraid. PM Modi shared, “You should never be afraid of nature. You cannot be afraid of nature because when we think we are in conflict with nature is when the problem starts.” Modi also shared that he has never felt the emotion of fear, “I have never experienced fear because my inbuilt temperament is very positive.” Prime Minister Narendra Modi spoke about the increasing awareness of cleanliness in India and said, “Only the people of India can make India clean. Personal hygiene is in the culture of people. But we need to develop the habit of social hygiene. Mahatma Gandhi has done a lot of work on it and recently we are getting good success in this. I believe India will succeed in this very soon.”

PM Modi’s message to the youth

PM Modi thanked Grylls for his visit and said, “I believe that through this programme especially the young generation of the world when they watch this, they will want to come to India. India will become a great tourist destination, for nature, for wildlife.”