Theaters are seemingly being faced with a challenge to be as prepared as possible for a post-COVID-19 phase.

It’s been a tough few months for cinema owners around the world, and the situation is no different in India. It arguably has been even more taxing for multiplex chains, where the last Hindi film to release on the big screen was Irrfan’s Angrezi Medium on March 12. With a flurry of mainstream Hindi films set to release on OTT platforms, and an overwhelming number of big-ticket Hindi films in the pipeline, theaters are seemingly being faced with a challenge to be as prepared as possible.

But in these uncertain times, where social distancing is being widely advocated, and communal experiences (like going to the cinema) are being discouraged, multiplexes may have to hit the ground running. Alok Tandon, CEO (INOX Leisure Ltd), says in a statement, “We are looking at this post-COVID phase as a new chapter in the customer life-cycle, where their trust and confidence will play a massive role.” Most multiplex chains, including PVR and Carnival Cinemas, have released videos to persuade audiences that all precautionary measures are being taken, and that cinemas will reopen with the highest priority given to the safety of its patrons. 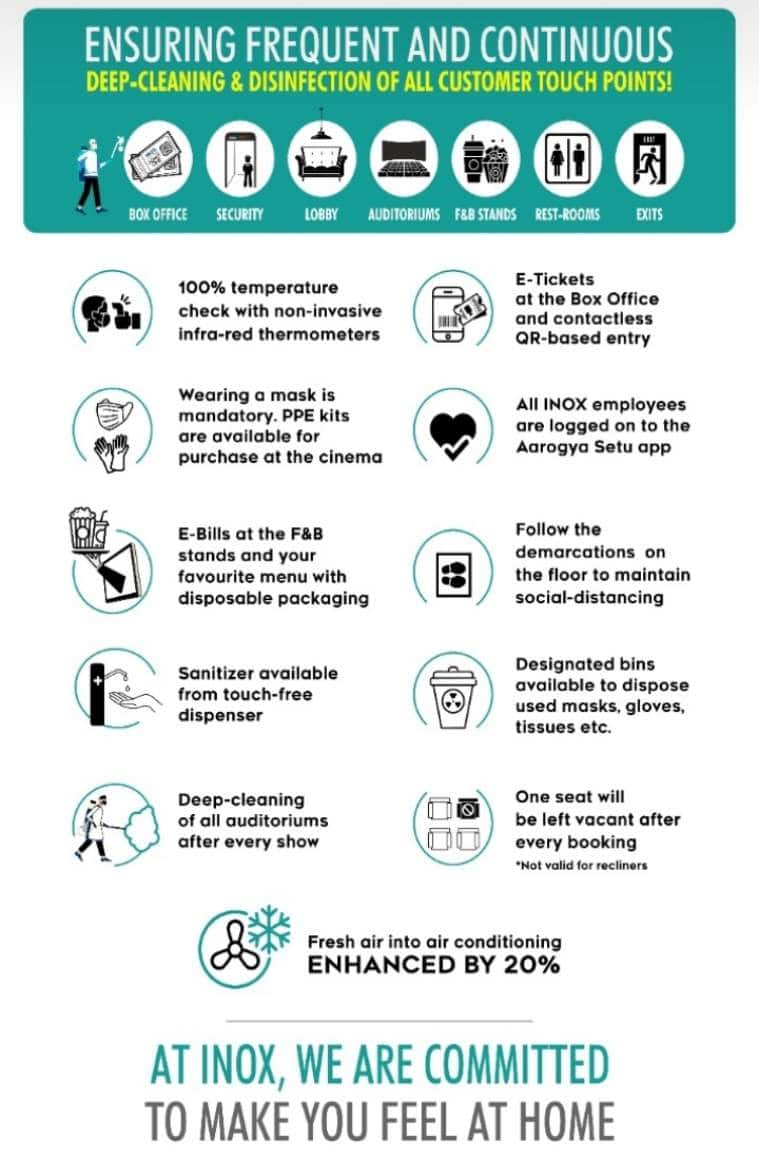 INOX shared the precautions that will be taken once theaters are reopened.

A video released by the PVR team shows demarcations at the ticket counter, food counters, and lobbies to ensure social distancing at all times. Patrons across all multiplex chains will be advised to wear a mask, for their own safety and the safety of fellow patrons. There will be no pat-down search, instead everyone will be subjected to a temperature check and sanitised near the entrance. Once the patrons have entered the auditorium, the bookings will be done in a manner where the adjacent seats will be left vacant. All three chains are striving to make the delivery of food & beverages, a 100% touch-free experience. While PVR will use UV cabinets to disinfect food packaging before service, both INOX and Carnival say they will be employing single-use, disposable packaging in their F&B counters.

Only 50% of the washrooms will be functional at any given point inside all multiplex chains. Once the show is over, Carnival Cinemas says it will appoint staff to guide the patrons to make an orderly, socially-distanced exit. While INOX will be timing their shows in a manner that doesn’t lead to crowding during interval or exit. All chains will ‘deep clean’ the auditorium after every show, and any spot that sees a frequency of patrons will be sanitised every two hours.

While it remains unclear when cinema chains will get the government directive to be operational, they have announced Rohit Shetty’s Sooryavanshi as this year’s Diwali release, and Kabir Khan’s 83 as a Christmas release. Both films were initially slated to release in March and April, respectively.