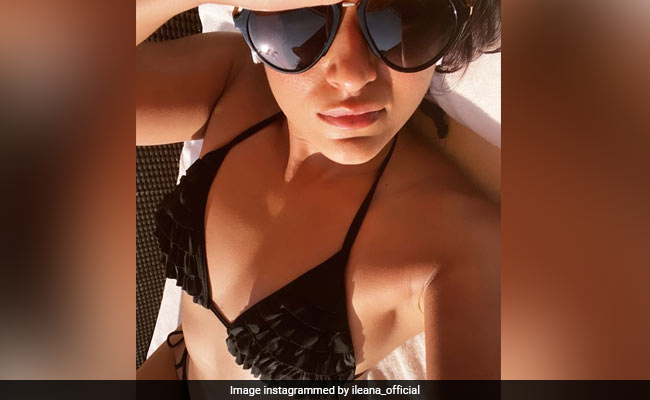 Ileana D'Cruz is a true blue beach baby and her Instagram posts are proof of that. The 34-year-old actress often expresses her vacation cravings in the form of swimsuit photos and looks like she just added one more to the list. The Rustom actress shared a selfie on Instagram and wrote that while she's dreaming of sun-bathing on a beach, her photo is actually from a "much-needed" fam-jam. "Mentally on the beach but actually in the middle of glorious much-needed family time. I'm happy, just don't look it," Ileana captioned her post. As usual, Ileana is cute as a button in a black, frilled bikini.

Ileana D'Cruz is an "island girl for life" and her Instagram is filled with such vacation photos. Here's when she revisited memories from her trip to Fiji.

After social distancing became the new normal because of the pandemic, Ileana wrote about how much she missed hanging out by the pool: "Throwback to when pool days and getting gloriously toasted in the sun was no big deal."

Looks Ileana D'Cruz perpetually dreams of the beach: "When the sea is calling out to you," she captioned one of her photos.

Ileana D'Cruz was last seen in the 2019 comedy film Pagalpanti, which starred Anil Kapoor, John Abraham, Urvashi Rautela, Arshad Warsi, Pulkit Samrat and Kriti Kharbanda in pivotal roles. She is best-known for her performances in Bollywood films such as Barfi!, Phata Poster Nikla Hero, Rustom, Baadshaho, Mubarakan and Happy Ending, among others.