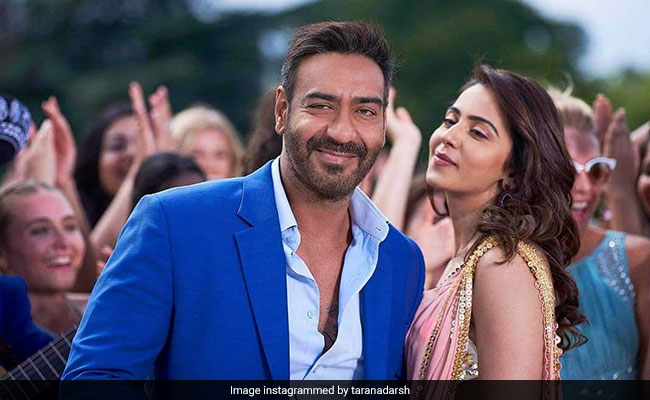 The box office report card of De De Pyaar De, starring Ajay Devgn, Rakul Preet and Tabu, is out and it is doing quite good for now. Trade analyst Taran Adarsh tweeted that De De Pyaar De is performing well after a "dull start" on the opening day and a turnaround is expected on second and third day of the film. He tweeted: "De De Pyaar De picked up towards evening after a dull start... Occupancy was higher in evening/night shows... Strong reports should ensure a turnaround on Day 2 and 3... Friday Rs 10.41 crore [including Thursday previews]. India business."

#DeDePyaarDe picked up towards evening after a dull start... Occupancy was higher in evening/night shows... Strong reports should ensure a turnaround on Day 2 and 3... Fri Rs 10.41 cr [incl Thu previews]. India biz. #DDPD

De De Pyaar De showcases the complicated relationship between 50-year-old Ashish (played by Ajay) and 26-year-old Ayesha, played by Rakul. Ashish and Ayesha are attracted to each other but in order to stay together, they must get Ashish's family's approval first. The hurdle for the couple doesn't stop here as Ashish have to face his ex-wife Manju (played by Tabu) also.

Over the concept of the film, Tabu said the film tries to understand how two couples with age gap tend to view love and relationships. She told news agency PTI: "The way a mid-40s couple deals with their relationship, their definition of love and relationship will be different than a 27-year-old woman. Her insecurities are different... It's about people who evolve and develop a unique relationship."

Cabinet Approves Extension Of PF Contributions By Government Till August