Actress Charu Asopa, who is married to Sushmita Sen's brother Rajeev Sen, found a spot on the trends' list for her recent Instagram exchange with a troll. The 32-year-old actress, missing dressing up for stepping out of the house during the lockdown, put on her favourite crop jacket and paired it with black pants and red lips to make the journey from the bedroom to the hall - she said this in the comments section. Commenting on Charu Asopa's post, a user attempted to troll and outfit shame the actress by saying all she wants to do is expose. Charu promptly responded to the comment and shut down the troll with these words: "If I've a good body, I'll flaunt it. Tumhari hai toh tum bhi dikhao (If you also have one, you can flaunt it too)." The no-filter version of Charu Asopa is pretty cool, no? 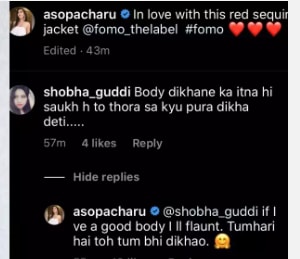 Charu Asopa's stunning "bedroom to hall" photos were actually for an appreciation post for this special item from her wardrobe as she captioned the album this way: "In love with this red sequin jacket."

In love with this red sequin jacket @fomo_thelabel #fomo

Keeping her promise - "I'll flaunt it" - Charu also shared this video of hers, sporting the same outfit combination, in which she can be seen dancing to Jiya Re from the film Jab Tak Hai Jaan: "Pehli baarish ki khushi," she captioned her post.

Meanwhile, Charu Asopa's Instagram is filled with work-out posts such as these.

Karanvir Bohra's daughters to have their own animation series

UP Police Officer Killed By Gangster Had Named Cops In Letter