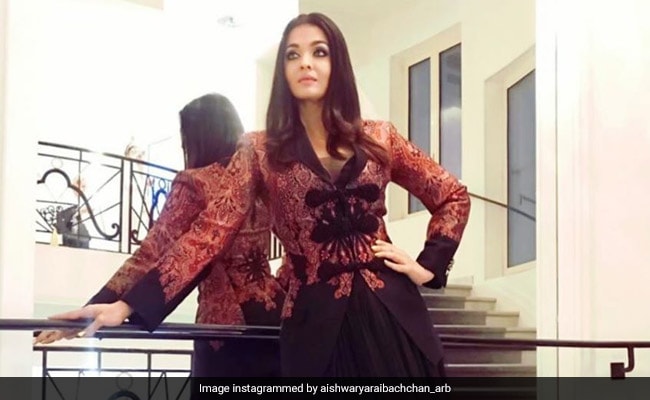 Aishwarya Rai Bachchan took a day off from the Cannes red carpet after back-to-back statement-making appearances but that didn't mean she didn't step out in couture. On Tuesday evening, while Sonam Kapoor was making a fashion splash in a Ralph and Russo tuxedo, a new photo of Aishwarya as femme fatale was spotted on her Instagram. The Cannes veteran paired a bronze jacket with a black tulle skirt with a thigh-high slit. Kohl-lined eyes, neatly parted hair and black stilettos wrapped the look in style. Aishwarya, who may have attended an event or a party last night, was a boss lady in sight at Hotel Martinez.

A post shared by AishwaryaRaiBachchan (@aishwaryaraibachchan_arb) on May 21, 2019 at 12:29pm PDT

While Aishwarya didn't really feel the need for a caption, Preity Zinta's comment pretty much summed it up: "Hottie." 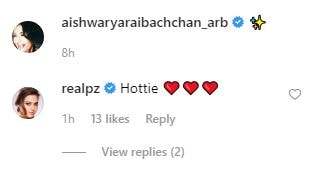 Preity Zinta's comment reminds us of this Twitter conversation of hers with Aishwarya's actor husband Abhishek Bachchan from when Ae Dil Hai Mushkil released:

Aishwarya and Preity, who have been friends since the beginning of their career, are yet another example who defy the stereotypical belief 'two actresses can't be friends'. Three years after she won Miss World, Aishwarya stepped into Bollywood with 1997 film Aur Pyaar Ho Gaya, a year after which Preity Zinta joined Bollywood with 1998 Dil Se.... Preity, who often said in interviews that she considered Aishwarya a friend, is spotted hanging out with the former beauty queen at Diwali parties. Preity has also co-starred with Abhishek in films such as Kabhi Alvida Naa Kehna and Jhoom Barabar Jhoom.

Omg ! Look what I found among my old photos-all of us posing during a night out in the #worldtour #ThrowbackMonday #Ash #Minni #Avan#strikeapose

Meanwhile, for her red carpet appearances in Cannes, Aishwarya opted for a Jean-Louis Sabaji ensemble on one day and Ashi Studio gown the other.

A post shared by AishwaryaRaiBachchan (@aishwaryaraibachchan_arb) on May 19, 2019 at 2:53pm PDT

A post shared by AishwaryaRaiBachchan (@aishwaryaraibachchan_arb) on May 20, 2019 at 11:32am PDT

While Deepika Padukone must ran out of heart-eyed emojis, Abhishek thought Aishwarya in Cannes is "the gold standard." We concur.