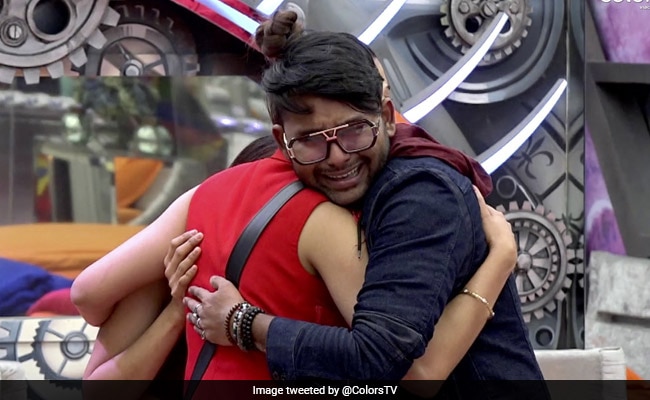 In tonight's episode of Bigg Boss 14, the contestant shared some bitter, as well as some sweet moments. The highlight of the show was the exit of toofani seniors. The show started with Siddharth Shukla, Hina Khan and Gauahar Khan discussing who cheated during the 'To be Confirmed' task. Hina and Gauhar said Siddharth's team didn't follow the rules and made the task worse. In the hall, Siddharth credits his team members for running the show like true players. After the seniors failed to reach a conclusion on who won the task, Bigg Boss announced that Siddharth's team lost the game and will leave the house. Because Nikki Tamboli was earlier announced as a permanent member, except her, Sidharth, Pavitra Punia, Shehzad Deol and Eijaz Khan were asked to leave the house.

After some time, Bigg Boss gave another shock to the housemates. The other two seniors - Hina and Gauahar Khan - were asked to exit the house. The housemates broke down in tears and bid farewell to the seniors.

.@nikkitamboli touches @eyehinakhan's feet out of respect and totally in tears. Did this make you emotional as well?#BB14#BiggBoss2020#BiggBoss14@BeingSalmanKhanpic.twitter.com/sIpth9k6kC

All contestants are hurt and in tears today. It is an emotionally exhausting day for the #BB14 contestants.#BiggBoss2020#BiggBoss14@BeingSalmanKhanpic.twitter.com/zMGNLLEKqs

In an unexpected turn of events, Pavitra Punia and Eijaz Khan returned to the house sporting PPE kits. However, they were asked to stay in a separate zone, away from other housemates. Later, Bigg Boss announced that Pavitra and Eijaz will stay in 'red zone' for the next few days but they will get to visit other contestants in the 'green zone' occasionally. It was also announced that the contestant in the 'red zone' will always face the risk of elimination.

Meanwhile, on the 19th day, Rahul Vaidya read the new rules of the house. Now that the seniors were gone, the contestants were told about the captaincy task - 'Jaan Bachi To Laakho Paaye' - through which the first captain of the house will be elected.

The next episode of Bigg Boss 14 will see how the captaincy task will turn several friendships sour in the house.

For 'Fukrey' Star Olanokiotan Gbolabo, Tributes From Farhan And Others

Viral: The One Where Katrina Kaif Dances Like Nobody Is Watching

Pongal 2021: "There's A Lot Of Be Grateful For," Writes Malavika Mohanan

Flipping Through The Pages Of Alia Bhatt's Ranthambore Vacation