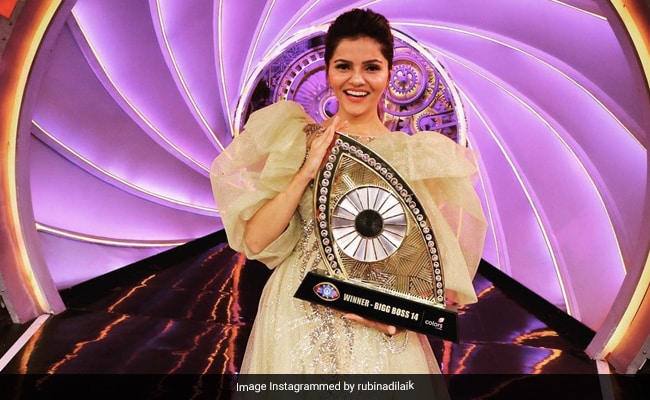 Rubina Dilaik, a popular face in the Indian television circuit, won Bigg Boss 14 on Sunday night. The 33-year-old actress, who entered the TV reality show along with her husband Abhinav Shukla, won the trophy and Rs 36 lakh after surviving in the house for over 140 days. After the show's host Salman Khan announced Rubina Dilaik's name as the winner of the show, the actress was flooded with congratulatory messages from friends, fans, family and former Bigg Boss contestants. Among them was a message from Bigg Boss 13 winner Sidharth Shukla. The actor tweeted on Sunday night: "Congratulations, Rubina Dilaik for winning BB 14 ... Well played."

Sidharth Shukla emerged as last season's winner of the TV reality show. He also featured as one of the 'Toofani Seniors' in Bigg Boss 14, alongside Hina Khan (season 11 finalist) and Gauahar Khan (who won season 7). As seniors, Sidharth and others had to extend their support to the contestants and they also took some important calls through the course of their 2 weeks stay in the house, which included evictions and giving immunity .