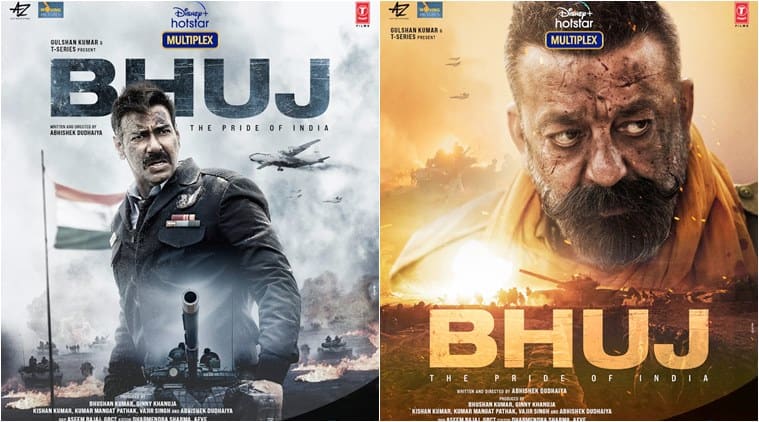 Ajay Devgn and Sanjay Dutt starrer Bhuj: The Pride of India is set against the backdrop of the Indo-Pak war in 1971.

In the film, Devgn will be playing the role of Squadron Leader Vijay Karnik. Sanjay Dutt, Rana Daggubati, Sonakshi Sinha, Parineeti Chopra and Ammy Virk will also be seen in pivotal roles.

During the Disney Plus Hotstar’s virtual press conference on Monday, Ajay Devgn called Bhuj: The Pride of India an interesting film. “After Tanhaji, Bhuj is also based on a true story, the war of 1971. I’m playing a IAF Squadron Leader Vijay Karnik. It’s a very interesting film about how a group of people saved Bhuj from getting taken over during the war. I won’t reveal more than this right now. I think it’s a big scale for me,” Devgn said.

According to the makers, Sanjay Dutt will be seen as Ranchordas Svabhai Ravari ‘Pagi’, who can identify a person’s gender, height and weight by their footprints. Rana Daggubati, on the other hand, will play Lt Colonel of Madras Regiment.

The makers also revealed that Bhuj: The Pride of India celebrates the courage of 300 women of Madhapur in Gujarat, who came together to repair the only runway in Bhuj that was destroyed during the war. Sonakshi Sinha will essay the role of Sunderben Jetha Madharparya, a farmer who convinces the women to help build the runway. Parineeti Chopra will be seen as an Indian spy living in Lahore.

Alongside Bhuj: The Pride of India, Disney Plus Hotstar also announced the digital release of Laxmmi Bomb, Sadak 2, The Big Bull, Khuda Haafiz and Lootcase. It had last week revealed that late actor Sushant Singh Rajput’s Dil Bechara will also premiere on the streaming platform on July 24.

Alia Bhatt "Shines" Bright Like The Sun In This Vacation Pic

Priyanka Chopra Had This Much Fun On Her Birthday In London. See Pics

Esha Deol Is Now A Producer. Her First Film Is 'Ek Duaa'

AAP Will Fight 2022 Punjab Assembly Elections On Its Own: Raghav Chadha

Manipur To Appoint Mirabai Chanu As Additional Superintendent Of Police

"Will Turn Lucknow Into Delhi": Farmers' Challenge To Yogi Adityanath