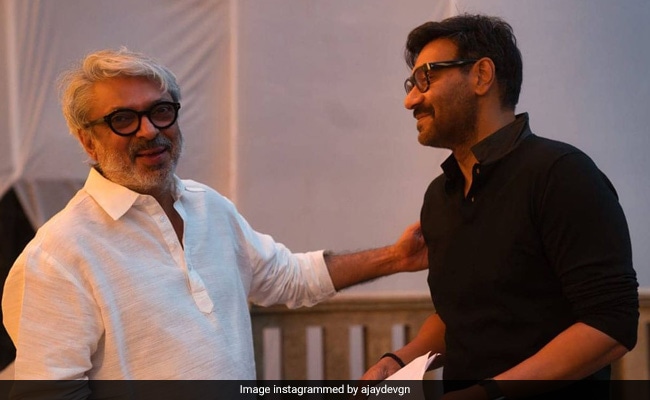 Ajay Devgn, who joined the sets of Sanjay Leela Bhansali's new directorial venture Gangubai Kathiawadi, starring Alia Bhatt in the titular role, shared a picture from the sets on Saturday evening. Ajay Devgn will be working with the filmmaker after two decades. They had earlier collaborated for the 1999 hit Hum Dil De Chuke Sanam, co-starring Salman Khan and Aishwarya Rai Bachchan. Posting a picture of himself along with Sanjay Leela Bhansali, Ajay Devgn wrote: "Back on Sanjay's set after two decades; feels good!" He added the hashtag #GangubaiKathiawadi. Meanwhile, the official Instagram page of Bhansali Productions welcomed Ajay Devgn on the sets of the film with these words: "We are happy to have Ajay Devgn join the team of Gangubai Kathiawadi."

In the film, Alia Bhatt plays the role of Gangubai Kathiawadi - a sex worker in Mumbai's Kamathipura, who was pushed into prostitution at an early age. The film showcases her journey as the head of a brothel and a political leader of Kamathipura. This will be Alia's first project with Sanjay Leela Bhansali. The actress was supposed to work with the filmmaker in a film titled Inshallah, co-starring Salman Khan. However, it got shelved.

Gangubai Kathiawadi is slated for a July 30 release in cinemas and it will clash with Radhe Shyam at the box office, which stars Prabhas and Pooja Hegde. Besides, Gangubai Kathiawadi , Alia Bhatt and Ajay Devgn will be seen sharing space in SS Rajamouli's RRR, also starring Ram Charan and Jr NTR.