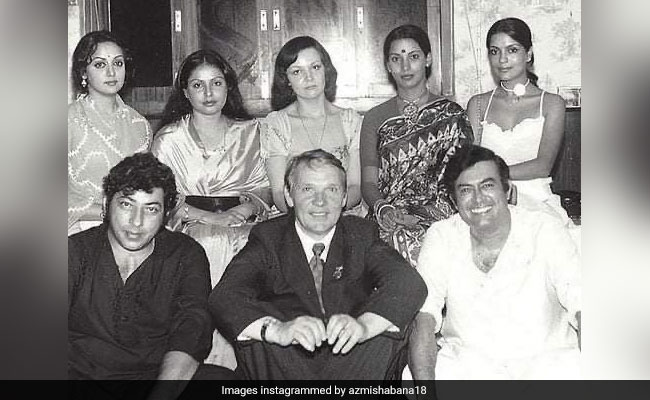 Shabana Azmi's latest entry on Instagram is what we call a perfect Throwback Tuesday post. The veteran actress shared an "iconic" photo that also features famous stars like Hema Malini, Rakhee Gulzar, Zeenat Aman and late actors Sanjeev Kumar and Amjad Khan in one frame. As per Shabana Azmi's caption, the black and white blast from the past also shows two Soviets, whom she didn't know. Going by a fan page dedicated to rare and old pictures of the Indian cinema, the two Soviets were actress Irina Akulova and filmmaker Mikhail Ershov. Sharing the photo, Shabana Azmi wrote: "Such an iconic photo! I wish I knew who the Soviets are in this picture... photo courtesy #Ausaja."

And here's the photo from the aforementioned fan club:

In terms of work, Shabana Azmi, who has won five National Awards, has worked in over 100 films. She is also a renowned theatre artiste. She made her film debut with the 1974 movie Ankur, for which she won her first National Award for the Best Actress. She has featured in critically-acclaimed films like Arth, Bhavna, Neerja, Khandar, Masoom, Paar, Tehzeeb, Godmother, Fire and Sati among many others. She has also been honoured with the Padma Shri and Rajiv Gandhi Award.