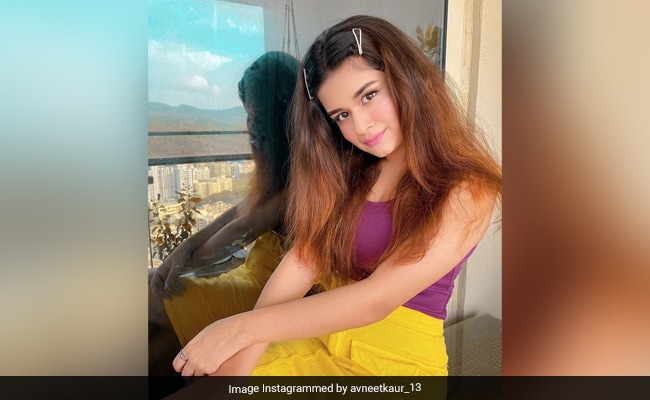 Actress Avneet Kaur, best known as Sultana Yasmine from the fantasy TV show Aladdin - Naam Toh Suna Hoga, scored 74 per cent in her class 12 board exams, the results of which were recently announced. In an interview with ETimes, Avneet Kaur, who is busy celebrating her board exam score, said she and her parents are overwhelmed: "It feels really good to get such a good percentage. Frankly, I did not expect to get this percentage. I am very happy and even my parents are really proud and happy. Everyone has been sending congratulatory messages," ETimes quoted her as saying.

Avneet Kaur, who first stepped into the entertainment industry as a contestant on Dance India Dance Li'l Masters, opened up about how she has been balancing her work and studies for a decade: "I've been doing this for quite a while now. I have been doing it for 10 years now since I have spent such a long time in the industry. I have been studying, shooting and balancing both and thankfully my school and college have also been good. I have studied really hard."

These days, I balance all the hate out with the love.❤️???? #livingmybestlife

For the 18-year-old actress, fitting in her studies in between hectic shooting schedules is no longer a big deal. In the interview, Avneet revealed she marked her attendance on Aladdin sets even on exam days: "There have been times when I have given my exams and then rushed to shoot. For Aladdin I used to give my exams and then head for Naigaon to shoot the show. It is something that I have been doing for quite a while now and I am used to it now. I would definitely say that it never gets old."

Bidding adieu to a part of my life. Yasmine is extremely close to my heart, a character which started with a warrior princess much against the fairy tale. I learnt so much portraying Yasmine, from horse ridding to doing my own stunts. I got to be a princess in literal sense. Thank you to each and everyone for making this journey super special with all of your love and support.❤️ #yasmine #goodbyesarehard #avneetians @sabtv @shantanu.agrawal @thesiddharthnigam @gulfamkhan_hussain @aamirdalvi @bansalsmita_ @raashultandon @gireesh_sahdev @grover.vikas51 @badar.nsd3

Avneet Kaur has participated in dance reality shows such as Dance Ke Superstars and Jhalak Dikhhla Jaa 5. She has also starred in TV shows such as Hamari Sister Didi, Chandra Nandini and Ek Mutthi Aasmaan. She's appeared in films like the Mardaani series of movies.