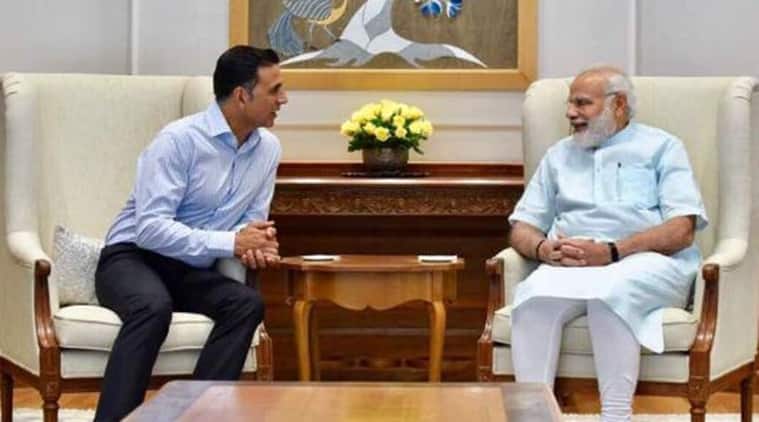 A day after Akshay Kumar said he would be getting into an “unknown and uncharted territory” with something he had not done before, the Bollywood actor Tuesday said he will have a “candid and completely non political” chat with Prime Minister Narendra Modi on Wednesday.

The 51-year-old star took to Twitter to announce that his conversation with the prime minister will be a “breather” in election time.

“While the whole country is talking elections and politics, here’s a breather. Privileged to have done this candid and COMPLETELY NON POLITICAL freewheeling conversation with our PM @narendramodi,” Kumar wrote on the microblogging site.

Modi replied to the tweet, saying, “Dear @akshaykumar, it was good talking to you about everything, except politics and elections :) I’m sure people would like watching our conversation.”

Kumar also shared a 24-second-long video snippet from the conversation.

While the whole country is talking elections and politics, here’s a breather. Privileged to have done this candid and COMPLETELY NON POLITICAL freewheeling conversation with our PM @narendramodi . Watch it at 9AM tomorrow via @ANI for some lesser known facts about him! pic.twitter.com/Owji9xL9zn

Do you ever wonder whether PM Modi manages to laugh during the heat of the election campaign? You’ll get the answer tomorrow at 9am @ANI, in an informal and non-political conversation that I got the chance to do with @narendramodi ji. Do watch! pic.twitter.com/pczNar7k3A

Dear @akshaykumar, it was good talking to you about everything, except politics and elections :)
I’m sure people would like watching our conversation. https://t.co/4iyZS1n2rN

Full interaction of PM Narendra Modi and Bollywood actor Akshay Kumar to be released tomorrow at 9AM pic.twitter.com/3IstJRRS5q

“Getting into an unknown and uncharted territory today. Doing something I have never done before. Excited and nervous both. Stay tuned for updates,” said the actor Monday, who has starred in a series of patriotic and social issue-driven films in recent years.

Hours after the cryptic tweet sparked speculation that he would be taking a political plunge Monday, he dispelled the rumours, saying “Grateful for all the interest shown in my previous tweet but just clarifying in light of some wild speculation, I am not contesting elections.”

Recently, Kumar has featured in films like Padman and Toilet: Ek Prem Katha has also featured in government ads on issues such as menstrual hygiene, anti-smoking and traffic safety rules. The National Award-winning actor said the interview will air on the Twitter account of a news agency at 9 am Wednesday, in which the viewers will discover “some lesser known facts” about Modi.