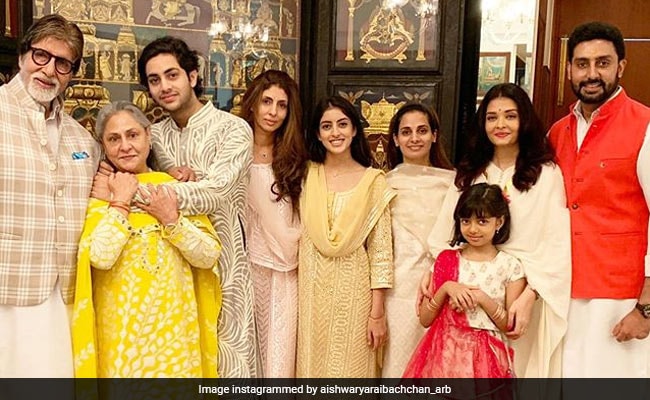 Bollywood celebrities celebrated Raksha bandhan on August 15 with the rest of the world and among them was Aishwarya Rai Bachchan, who shared highlights from the festivities a little later than everyone else. On late Thursday evening, Aishwarya Rai Bachchan shared glimpses of Raksha Bandhan celebration with her brother Aditya Rai and his family. Aishwarya's daughter Aaradhya also tied rakhi to Aditya's sons. In one of the pictures on Aishwarya's Instagram page, the 45-year-old actress can be seen posing with Aditya, his wife Shrima and their sons. Aaradhya and Brinda Rai (Aishwarya and Aditya's mother) also joined them in the picture, which was captioned, "Family time."

Before celebrating Raksha Bandhan with the Rais, Aishwarya and Aaradhya celebrated the festival with the Bachchans. Aishwarya also shared pictures of how seven-year-old Aaradhya tied rakhi to Agastya Nanda, son of Shweta Bachchan Nanda.

Here are pictures shared by Aishwarya Rai Bachchan from her Raksha Bandhan 2019 album:

A post shared by AishwaryaRaiBachchan (@aishwaryaraibachchan_arb) on Aug 15, 2019 at 1:09pm PDT

A post shared by AishwaryaRaiBachchan (@aishwaryaraibachchan_arb) on Aug 15, 2019 at 12:32pm PDT

A post shared by AishwaryaRaiBachchan (@aishwaryaraibachchan_arb) on Aug 15, 2019 at 1:21pm PDT

And here are some posts shared by Shweta Bachchan Nanada:

On the work front, Aishwarya Rai Bachchan, who was last seen in Fanney Khan, has signed up for a film with Mani Ratnam while she's also set to star in Anurag Kashyap's film, co-starring her husband Abhishek Bachchan.