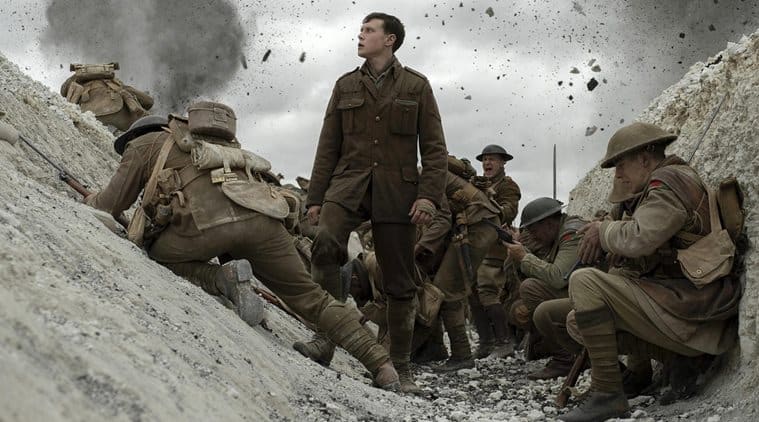 The first reactions to Sam Mendes’ war epic 1917 are in, and it appears the British director, known for films like American Beauty and Skyfall, has created a masterpiece.

Those who have seen the film are downright thrilled, and expressions like “a stunning cinematic achievement”, “cinematic roller-coaster ride” and “hypnotic” are being thrown around.

As the title says, the film is set in 1917. Two British soldiers, played by George MacKay and Dean-Charles Chapman, are commanded by Colin Firth’s officer to deliver a piece of information deep into the enemy territory to save 1,600 men, including the brother of Chapman’s character.

The film already had a positive buzz thanks to stunning looking trailers. Oscar-winning cinematographer Roger Deakins has handled the camera, so that was to be expected.

Collider’s Steven Weintraub tweeted, “I’ve seen a lot of movies and know how they are made and I have zero idea how Sam Mendes and Roger Deakins pulled off the cinematography in #1917. It’s a stunning cinematic achievement and easily the front runner for the Oscar in cinematography. Mind blown.”

He added, “From the second #1917 starts to the final frame, it’s a total immersion into another time and place and it’s just a stunning movie on every level. Another 2019 film that absolutely blew me away. See this on the biggest screen you can.”

Filmmaker Edgar Wright wrote, “‘1917’ is a thrilling, immersive, emotional journey into the heart of war. It’s exceptional on a technical level, yet frequently stunning in its simplicity. Sam Mendes and DP Roger Deakin (along with their crew) created a hypnotic cinema experience that is both riveting and moving.”

Fandango’s Erik Davis tweeted, “#1917 is a tremendous piece of filmmaking. Bold in its storytelling, masterful in its execution- it’s thrilling and emotional and I could not take my eyes off the screen from the second it began to the second it ended. The very definition of a film you MUST see on the big screen. Wow.”