The wilful defaulters’ tag will make it tough for the Kerkars to borrow from banks and financial institutions. A Yes Bank spokesperson said the lender can’t comment on specific client matters. Yes Bank has the highest exposure to Cox & Kings, having sanctioned a credit of Rs 2,127 crore, according to the lender’s financial claim submission to the tour operator’s resolution professional overseeing the insolvency process.

In July this year, Yes Bank acquired 19% in Cox & Kings by invoking pledged shares. It also picked up 30% in Ezeego One Travel & Tours, a company promoted by Cox & Kings. Three months later, it acquired 21% in Tulip Star Hotel (earlier known as Centaur) in Mumbai. 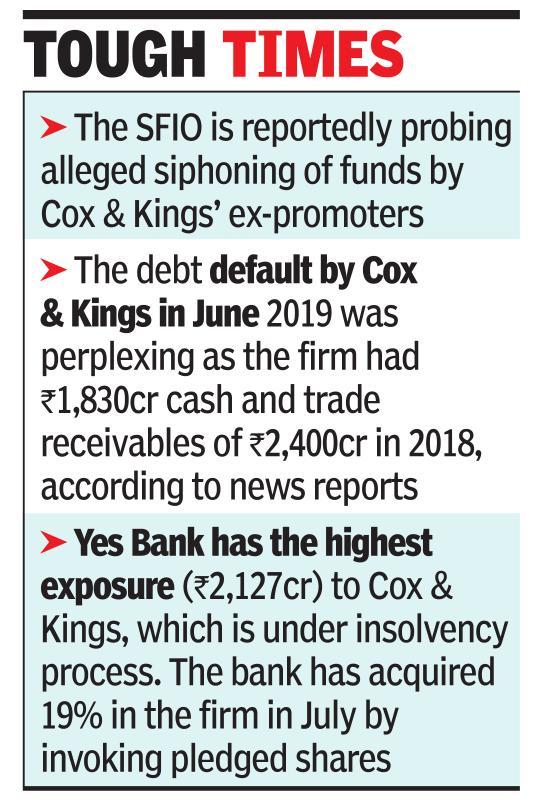 The sea-facing five-star property was acquired by Peter and Urrshila’s father Ajit Kerkar, former chairman of Taj Hotels, from the government in 2001. However, Nirmal Lifestyle, in a public notice, has claimed stake over certain areas of Tulip as it has invested a “substantial” amount in developing it.

If a person is declared a wilful defaulter, then according to rules, banks cannot sanction any additional facilities to him/her. Banks can also initiate criminal proceedings against the person/s if it is found that funds have been diverted with mala fide intentions.

The serious fraud investigation office (SFIO) is reportedly probing the alleged siphoning of money by Cox & Kings’ erstwhile promoters. The debt default by Cox & Kings in June 2019 was perplexing as the company had cash of Rs 1,830 crore and trade receivables of Rs 2,400 crore in 2018, according to a news report.

RattanIndia Finance, one of the 22 financial creditors to Cox & Kings, had moved the company law tribunal to initiate insolvency proceedings against the travel services firm.

Cox & Kings’ UK arm has been bought out of administration by luxury travel company Abercrombie & Kent. Law firm Irwin Mitchell, which assisted the deal, said the transaction safeguards all holiday bookings and 68 jobs of the UK unit.