December 16, 2019 3196
CHENNAI: If you have provided separate restrooms and canteens for men and women at your factory, campus or corporate office, be prepared to offer similar facilities for transgender employees as well.

The new occupational safety health and working conditions (OSHWC) code, currently pending clearance in the Lok Sabha, has included special provisions for transgender employees for the first time. It will mandate employers to offer transgender staffers the same separate amenities that are currently on offer for male and female employees in an attempt to include them in the organised workforce.

“The code does not list the specific amenities. But there is a provision in law already that there have to be restrooms, canteens, drinking water for men and women. So, these would be included in the trans amenities once the code is passed in Parliament,” said K Varadan, chief consultation officer of HR firm Aparajitha Corporate Services. Varadan spoke on the sidelines of a CII-organised HR summit in Puducherry on Friday.

The idea “is to bring the transgender community into the workforce”. “Right now, employers offer separate facilities for men and women. But now, transgenders will be entitled to the same rights,” he said. 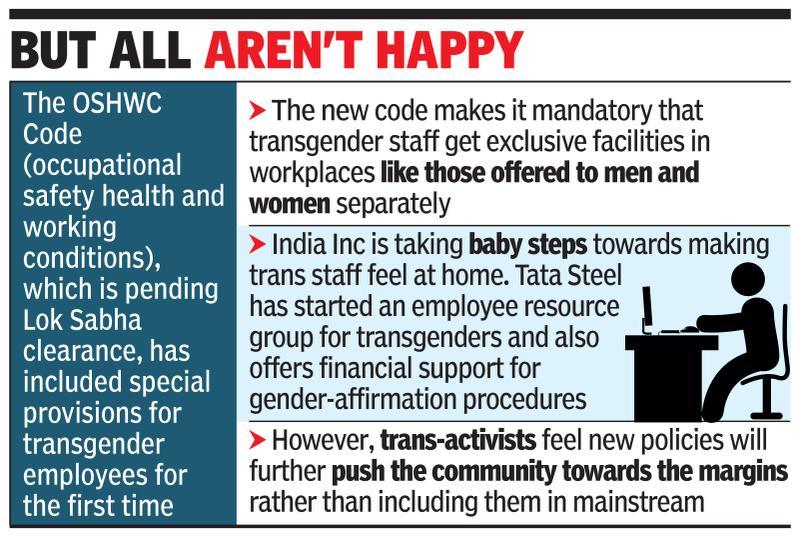 Then there is the Kochi Rail Metro which, in 2018, made inroads into hiring trans people “with nearly 23 trans people in housekeeping and ticketing”. “There are examples of trans inclusivity in e-commerce and services as well,” said Sen. The good news is many startups like Nestaway, UberEats, Bro4U and PeriFerry have hired transgenders, thus opening job opportunities for this community, he added.

Trans-activists, however, say that the new policies would push the community further towards the margins rather than including them in the mainstream. “I welcome the initiative, but separate facilities mean exclusion too. I would have welcomed unisex toilets,” said Puducherry-based artist and trans-activist Kalki Subramaniam. Toilets are a big debate for the community globally and activists like Subramaniam feel that trans men and women should be free to identify with whichever gender they feel they belong to.

Trans-activists also feel inclusion efforts are more tokenism than anything else. “We don’t want corporate India to gender the HR narrative. My gender should not be the reason for me getting a job, my merit should be the only criterion,” said Apsara Reddy, Chennai-based politician, journalist and trans-activist. The community also faces problems in statutory documentation including filing of taxes, where male and female are the only options in the forms. “Even though in Aadhaar cards there is a provision for the 3rd gender, there is no such provision with EPFO and PAN,” said Sen.