November 22, 2019 71
MUMBAI: Amid uncertainty over the ability of DHFL to meet its liabilities, there is hope for retail investors as the RBI-appointed administrator will take a fresh view on repayments. Earlier, lenders believed all creditors should take significant haircuts as there was not enough money to go around. Currently, there is no RBI moratorium on repayments by DHFL. However, the Bombay high court has restrained the company from making out payments to any secured or unsecured creditors.

Sources said that although the RBI-appointed administrator R Subramaniakumar would be acting independently, lenders will have to abide by his decisions given that it is a regulatory process. Subramaniakumar, former MD and CEO of Indian Overseas Bank, took charge of the company on Wednesday and is expected to take a couple of weeks before being able to get an idea of its financial position. 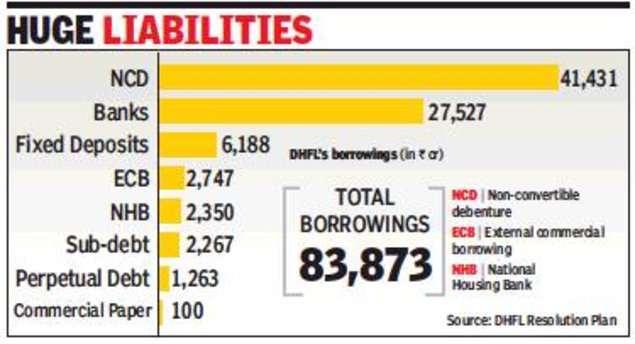 This is the first time that the RBI has appointed an administrator for a financial company and it is not known what will be the order of priority that will be followed before the National Company Law Tribunal (NCLT) process.

In the cases of failed banks, where an administrator was appointed by the RBI, interests of retail depositors had been protected. While superseding the board of the company on Wednesday, the RBI had said that the ultimate objective is to resolve the debt in the NCLT under the insolvency process.

The resolution plan submitted by DHFL in July 2019 placed the company’s key liabilities at Rs 83,873 crore (see graphic). Of this, Rs 6,188 crore are in the form of fixed deposits, bank loans Rs 27,527 crore and non-convertible debentures Rs 41,431 crore. Against this, the housing finance company has advanced home loans of Rs 35,233 crore, project loans & loans to builders of Rs 47,610 crore, and investments of Rs 6,633 crore.

A forensic audit by KPMG has said that the end use and recoverability of loans worth Rs 20,000 crore could not be determined. The company’s auditors had also issued a qualified report, pointing out that there were deficiencies in rollover of Rs 5,562 crore of inter-corporate deposits. “It is unlikely that there will be any resolution without lenders taking significant haircuts,” said a banker.

The order of priority followed in the event of liquidation would be to first cover the cost of the insolvency process, pay salaries and secured creditors which will include banks and bond holders. Fixed deposit holders are among the unsecured creditors and rank above equity investors.