India's central bank approved an early transfer of a part of its profit to the government, which is desperate for cash to fund populist pledges ahead of a national election.

The Reserve Bank of India's board, approved Rs 28,000 crore ($4 billion) as interim dividend, according to a statement. This is the second straight year that the RBI has announced an advance payment to Prime Minister Narendra Modi's government.

In approving the measure, the RBI is emulating Turkey's central bank that came to the aid of its government before municipal elections in March seen as a referendum on President Recep Tayyip Erdogan's rule. The RBI dividend will help PM Modi's government partly bridge a budget gap and could be key to funding an income support program for farmers ahead of a national vote due by May.

The government needs cash after allocating Rs 20,000 crore toward the first installment of the $10.5 billion program by March 31. The cash support -- handing about 12 crore farmers with up to 2 hectares (4.9 acres) three payments of Rs 2,000 per year -- was PM Modi's last attempt at reversing fortunes after his Bharatiya Janata Party which lost control of three key states in regional elections in December.

The transfer is "based on a limited audit review and after applying the extant economic capital framework," the central bank said in a statement. The central bank's financial year runs from July to June. 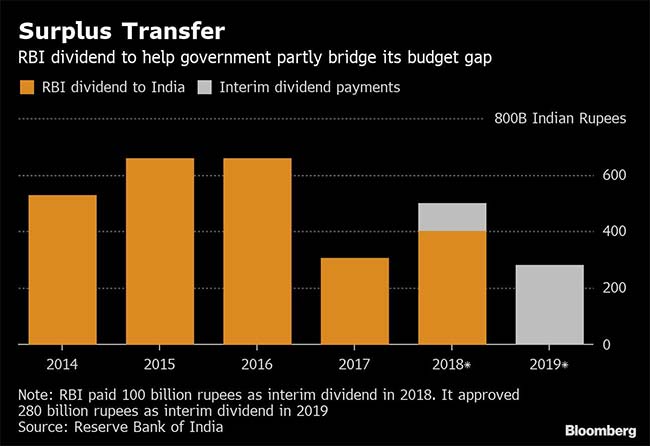 The government has, in all, budgeted Rs 74,140 crore in dividends from the RBI and the state-run lenders in the year ending March 31 and has penciled in Rs 82,910 crore for the next year.

The demand on the RBI for more dividends and to part with a greater share of its capital has been a contentious issue between the central bank and the government. It resulted in a public standoff last year and is seen as one of the reasons for the abrupt exit of then Governor Urjit Patel.

The finance ministry has asked the central bank to transfer about Rs 27,000 crore of surplus capital withheld by it in the previous two financial years. Separately, finance ministry officials estimate the RBI has at least Rs 3.6 lakh crore more capital than it needs, which they say can be used to help bolster weak Indian banks.

However, a recent study by the Centre for Advanced Financial Research and Learning, a Mumbai-based think tank, showed the central bank has insufficient capital, and much less a surplus to hand over to the government.