December 15, 2019 67
NEW DELHI: See it to believe it. Maruti Suzuki tosses the runaway success Ertiga on the frying pan, sprinkles a few cosmetic changes, garnishes with some mechanical tweak, engineers it in low steam and dishes out an all-new XL6.

A new platter and here’s the new price. Available in alpha and zeta variants, with automatic and manual transmissions on offer, the XL6 is priced at Rs 9.6 - 11.5 lakh (ex-showroom, Delhi). Carmaker’s philosophy has been simple: Load a segment with too many products to outplay the rivals. Let’s find out highs and lows of the XL6: 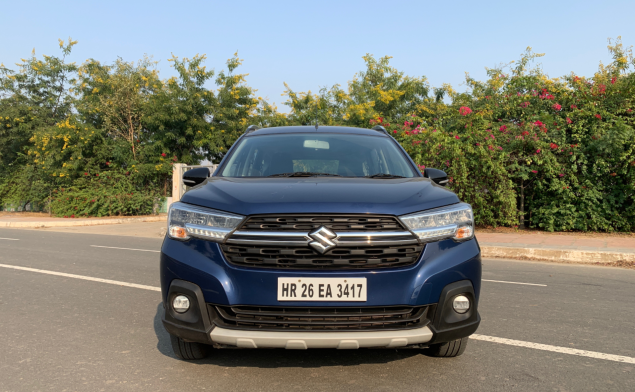 Built on the Ertiga platform, witness the changes inside out. The front facet is reworked. Now you get a new black grille with chrome slab embossed. The XL6 houses a new set of LED DRLs and fog lamps, with a plastic cladding running across the body. Skid plates on the front and rear lift the athletic stance, giving it an SUV-ish feel. A new badge at the rear, that aside, it’s an Ertiga second-gen replica.

To begin with, those 14-inch wheels appear undersized. The black ORVMs and roofline make the side profile look ordinary, with a similar story at the rear. Take the XL6 badge and skid plate off, it’s surely going to be an Ertiga from a distance. While simplicity is good, Maruti projects the XL6 a premium MPV. Probably things like a rear spoiler and a shark fin antenna could have spiced things up.


The second-row bench seat has stepped down, and Maruti roped in all-new Captain seats: Large, cushiony and refreshing. Knee room and headspace on offer are decent, however, the under-thigh support needs some attention. The all-black cabin is well-appointed with spacious contours. Slide forward the middle row to slip into the rear third. Slightly tight on backseat space, things are mostly identical to the Ertiga. SmartConnect instrument console is borrowed from the recent crop of Marutis rolled out.


You have the overhead AC vents and armrests for the second row. However, I would have liked a sunroof, at least optional, or utility bucket in between the seats. Probably, something the engineers could only address. Maruti Suzuki calling XL6 a premium could have offered more after all the carmaker traded Ertiga's space practicality with new seat configuration. A reverse camera and auto headlights are also limited to the range-topping Alpha trim.


Tried and tested K15B petrol powertrain, which is leased from the second-gen Ertiga, is power rated at 103 bhp and 138 Nm. The engine is mated to 5-speed manual gearbox with a 4-speed automatic as an option. The smart mild-hybrid system as standard provides a gentle push during acceleration. The XL6 has good road manners, thanks to a well-spaced gearbox and relatively plush ride quality.


Maruti Suzuki had ample scope of playing around with the engine. Throwing in the outgoing diesel units from Brezza or Ciaz could have found a fair amount of takers. The BSVI unit, undoubted performance compromised, isn't very punchy and you have to keep the XL6 in a higher gear higher for quick city runabouts. High mileage, synonymous with Maruti offerings, isn't the case here. During our road test, the MPV delivered 14 kmpl in the cities and 15.6 kmpl on the highways. A silent ride is only to an extent. Post 4,000 rpm, the engine chugging creeps into the cabin, making the experience somewhat annoying.