Law Against Cow Slaughter in UP Being Misused, Says Allahabad High Court

China's output is expected to exceed 2019 levels this year

The Covid-19 pandemic will produce lasting shifts to global growth, pushing China even more to the forefront.

The proportion of worldwide growth coming from China is expected to increase from 26.8 per cent in 2021 to 27.7 per cent in 2025, according to Bloomberg calculations using International Monetary Fund data. 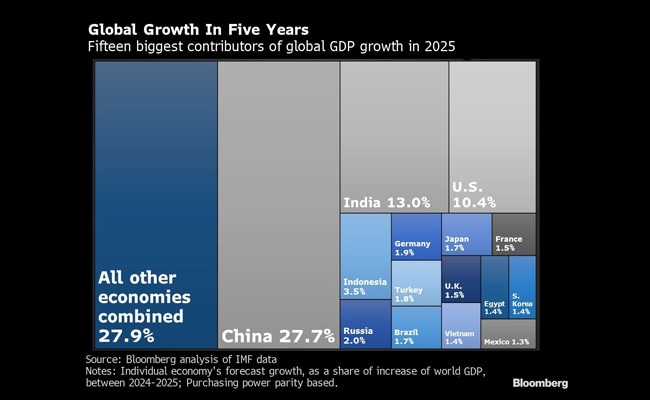 That's more than 15 and 17 percentage points, respectively, higher than the US share of expected global output. India, Germany and Indonesia round out the top five largest growth engines, next year.

The fund now forecasts world gross domestic product to shrink 4.4 per cent this year, an improvement from the 4.9 per cent drop seen in June, according to the latest World Economic Outlook released this week. Next year, the IMF sees growth of 5.2 per cent.

The IMF estimates China will grow by 8.2 per cent next year, down a full percentage point from the IMF's April estimate but strong enough to account for more than one-quarter of global growth. The US is expected to rally to a 3.1 per cent increase which will account for 11.6 per cent of global growth in 2021 in purchasing power parity terms. 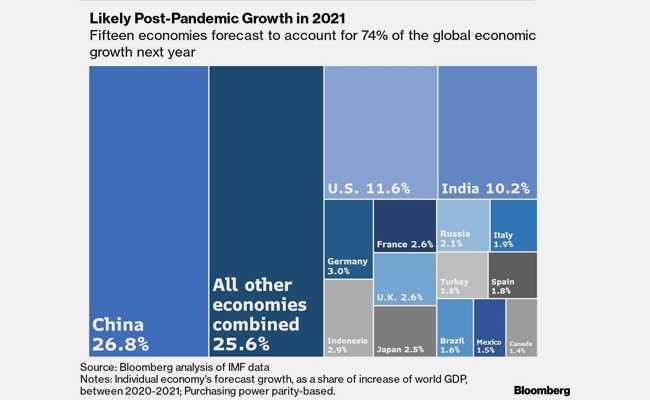 By 2025, the cumulative loss in output relative to the pre-pandemic projected path is projected to grow to $28 trillion.

"While the global economy is coming back, the ascent will likely be long, uneven, and uncertain," Gita Gopinath, IMF's director of research, wrote in the report.

The five nations with the highest Covid-19 death counts -- US, Brazil, India, Mexico and UK -- are forecast to suffer a total GDP decline of nearly $1.8 trillion in nominal terms and $2.1 trillion after having been adjusted for differences in purchasing power.

Extreme poverty is set to rise for the first time in more than two decades, and persistent output losses imply a major setback to living standards versus the pre-pandemic days, the IMF said.

"The poor are getting poorer with close to 90 million people expected to fall into extreme deprivation this year," said Ms Gopinath.

In January, before the coronavirus began spreading widely, the IMF estimated 3.3 per cent global growth this year and 3.4 per cent in 2021.

Russia, the ninth largest contributor of total growth in 2021, is poised to move up to fifth in five years as Germany's economic growth slows.

After the rebound in 2021, global growth is expected to gradually slow to about 3.5 per cent in the medium term, according to the report.

Except for China, where output is expected to exceed 2019 levels this year, output in both advanced economies and emerging market and developing economies is projected to remain below 2019 levels even next year.

Dhoni's sweet reaction to the Dhoni-CSK themed house in Cuddalore